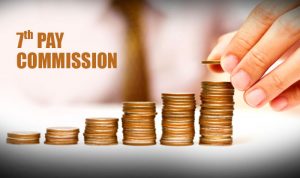 More than 48 lakh central government employees will start getting HRA (House Rent Allowance) hike in range of 106 percent to 157 percent from this month (July, 2017) salaries as the Union Cabinet chaired by the Prime Minister Narendra Modi on last Wednesday approved the recommendations of the 7th CPC on allowances with some modifications.

While approving the recommendations of the 7th CPC on 29th June, 2016, the Cabinet had decided to set up the Committee on Allowances (CoA) in view of substantial changes in the existing provisions and a number of representations received.

The modifications are based on suggestions made by the CoA in its Report submitted to Finance Minister on 27th April, 2017 and the Empowered Committee of Secretaries set up to screen the recommendations of 7th CPC.

As the Cabinet has accepted the recommendations of A K Mathur-led 7th Pay Commission on allowances so the HRA component of central government employees will increase ranging between 122 percent and 157 percent.

Take, for instance, a central government employee at the very bottom of the pay scale, where the basic pay (pay of pay band + grade pay) is now Rs 7,000, would currently be entitled to an HRA of Rs 2,100 in a Class X city. As per 7th Pay Commission, the new entry level pay at this level is Rs 18,000 per month against which the new HRA for a Class X city would be Rs 5,400 per month, that is 157 percent more than the existing level.

Similarly, at the highest level of the pay scale, the Cabinet Secretary and officers of the same rank have a basic pay of Rs 90,000, which means they are entitled to current HRA of Rs 27,000 in Class X towns. After the revised pay scale, the new basic pay is Rs 2.5 lakh, for which the HRA would be Rs 60,000, meaning a hike of 122 percent.

As far as other allowances are concerned, the Union Cabinet has decided not to abolish 12 of the 53 allowances which were recommended to be abolished by the 7th CPC.

“The decision to retain these allowances has been taken keeping in view the specific functional requirements of Railways, Posts and Scientific Departments such as Space and Atomic Energy. It has also been decided that 3 of the 37 allowances recommended to be subsumed by the 7th CPC will continue as separate identities. This has been done on account of the unique nature of these allowances,” as per the govt statement.

“The rates of these allowances have also been enhanced as per the formula adopted by the 7th CPC. This will benefit over one lakh employees belonging to specific categories in Railways, Posts, Defence and Scientific Departments,” it said.