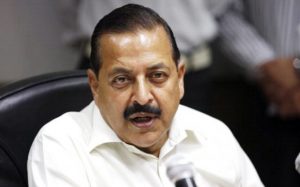 The members of delegation held a detailed meeting with Dr. Jitendra Singh and thanked him for his patient hearing and also recalled their earlier meetings with him in which he had responded very positively, as a result of which, the file work pertaining to their issues had got promptly expedited. They said, they were approaching him once again because they felt encouraged that they would get justice from him.

The members of delegation also submitted a memorandum to Dr. Jitendra Singh, wherein they pointed out that there were over 1600 Under Secretaries in the Government of India who had been waiting for relief for the last nearly 4 years since the last cadre review submitted its report. They also sought to draw his attention to the fact that there are 73 vacancies at Deputy Secretary/ Director level under Central Staffing Scheme.

The members of delegation said that, following their last meeting with Dr. Jitendra Singh, the DoPT had expedited their case and now the only major step towards conclusion of the case was a presentation to be made by the DoPT for further approval. They requested that the same should be done at the earliest.

Dr Jitendra Singh assured the members of delegation that in the last two years, the DoPT had expedited all the cases of promotions, empanelment and cadre reviews with the result that some of such officers, who had not received a single promotion for the last over 20 years, were also able to receive promotion in designation as well as hike in pay-scale. He further said, every government employee deserves to receive his due elevation and enhancement on time, unless there is a compelling reason against it. He also assured the members of delegation that within a matter of few days, they will find their case being visibly processed.