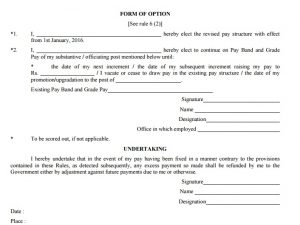 Rule 1– This rule is self-explanatory.

Rule 2– This rule lays down the categories of employees to whom the rules apply. Except for the categories excluded under sub-rule (2), the rules are applicable to all persons under the rule making control of the President serving in Departments paid from Civil Estimates. They do not apply to the employees under the Ministry of Railways and civilian personnel paid from Defence Services Estimates, for whom separate rules will be issued by the Ministries concerned. The rules do not also apply to Gramin Dak Sevaks in the Department of Posts. The rules, however, apply to work charged establishments.

Rule 3 and 4– These rules are self-explanatory.

Rule 6– This rule prescribes the manner in which option has to be exercised and also the authority who shall be apprised of such option. The option has to be exercised in the form appended to the rules. It should be noted that it is not sufficient for a Government servant to exercise the option within the specified time limit but also to ensure that it reaches the prescribed authority within the time limit. In the case of persons who are outside India at the time of notification of these rules, the period within which the option has to be exercised is three months from the date they take over charge of the post in India. In the case of Government servants the revised pay structure of whose posts are announced subsequent to the date of issue of these rules, the period of three months will run from the date of such announcement.

Persons who have retired between 1st January 2016 and the date of notification of these rules are also eligible to exercise option.

Rule 8– This rule prescribes the method of fixation of pay of employees appointed on direct recruitment on or after 1st day of January, 2016.

Rule 9 and 10– These rules prescribe the manner in which the next increment in the new pay structure shall be regulated.

Rules 11 to 17– These rules are self-explanatory.