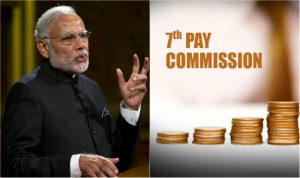 7th Pay Commission: Not appropriate to compare recommendations with previous ones, says Govt

The government today notified the recommendations of the Pay Commission, which will be effective January 1.

The government Tuesday said it is “not appropriate” to compare the increase in minimum pay suggested by the 7th Central Pay Commission with that of the previous commissions.

According to the 7th Pay Commission, the real increase given in 1996 and 2006 in minimum pay was 31 per cent and 51 per cent. As compared to that, the commission recommended an increase of 14.29 per cent.

“The 7th Central Pay Commission has worked out its recommendations on pay based on all relevant factors having a bearing on the prevailing circumstances and, therefore, viewing the increase on this occasion in the light of the circumstances obtaining 10 and 20 years ago is not appropriate,” Minister of State for Finance Arjun Ram Meghwal said in a written reply to the Rajya Sabha.

“In order to enhance the income of other categories of workers, both central and state governments are required to fix, review and revise the minimum wages of the workers employed in scheduled employment under their respective jurisdictions at an interval not exceeding five years.

“The minimum rate of wages are also applicable for the workers engaged on contract basis,” he said while replying to another question.

The pay commission, he added, recommends changes regarding the principles governing the emoluments structure of central government employees and allied services.

Meanwhile, the government today notified the recommendations of the Pay Commission, which will be effective January 1.